Tattoos go against many peoples’ beliefs. In several religions the body is considered a temple and should not be marred. In contrast, though, some people believe that religious tattoos are one of many ways to express their devotion to their faith, and see it as a way to solidify and show the permanency of their devoutness.

There are many examples of Western religion in tattoos. Symbols of both Christian and Catholic worship can be seen everywhere in crosses, praying hands and images of deities, saints and even angels. The crucifix is a favored depiction. This shows Jesus hanging from the cross, frequently in black and white, with the slightest bit of red for blood. These often contain quotes in Latin, directly from the bible or simply stating the location that it can be found. Many people also like to use the image of the mother Mary. Her expression is often sad, and her arms are usually set wide apart in a welcoming fashion, though she is occasionally depicted holding the image of the sacred heart. Although in Judaism tattoos are considered forbidden, many people still like to use the Star of David, and use religious quotes in beautiful Hebrew lettering.

There are also many Eastern religious tattoos. The Buddhist wheel is a popular design. It is said to represent the cyclical nature of life and the afterlife. The endless knot is another good example of religious tattoos interpreted from symbology. This symbol is meant to show the endless wisdom and compassion of the Buddha. Some people also like to use the intricate and colorful design of the Ashtamangala — or, eight auspicious symbols — which combine eight symbols that the Buddhist find especially lucky. There are also several other symbols that can be used in this style of art; the Four Guardian Kings, the Buddhist flag, and many beautiful offerings, amongst other things.

Hinduism is also quite broad in its symbolism. One of the most frequently used symbols is the Aum (or Om), which is said to be one of the most important emblems of this faith. It is a representation of several important triads, one of which is the three worlds; heaven, atmosphere and earth. The lotus is another important symbol. It represents beauty and detachment. This detachment is important as it frees a person from being reborn.

This by no means covers all the possibilities of religious tattoos, nor all of the faiths. Every religion carries its own symbols, styles and beauty. With research and patience, you will certainly find the perfect style to express your personal devotion. 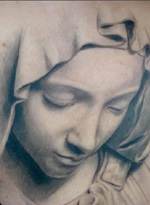 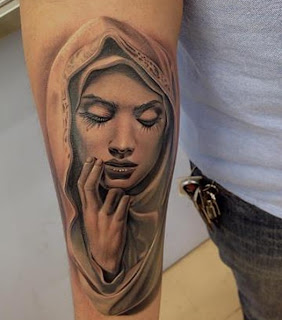